I knew cactus could store a lot of water, but I had no idea how much!  Did you know that a fully-grown saguaro cactus can soak up and store up to 200 gallons of water during a good downpour? And then they can store the water until the next rainfall (which in the desert might be awhile).

I wanted to demonstrate this concept with Ava. 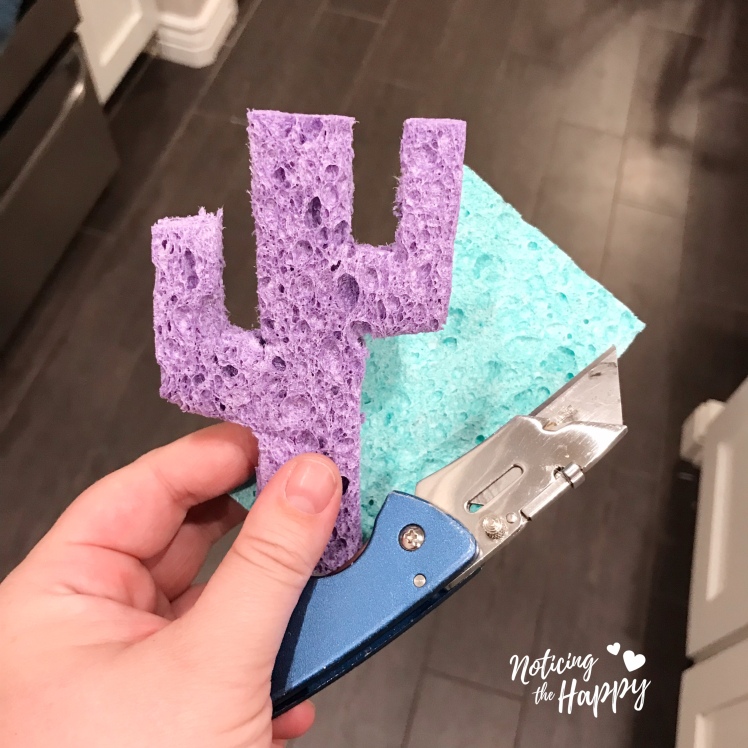 First, I started by cutting sponges into the shape of a cactus.  Then we put a little bit of water into two cups (one for her and one for me). I asked her what she thought would happen when we put the sponges in.  Ava says “wet!”  She was mostly right. 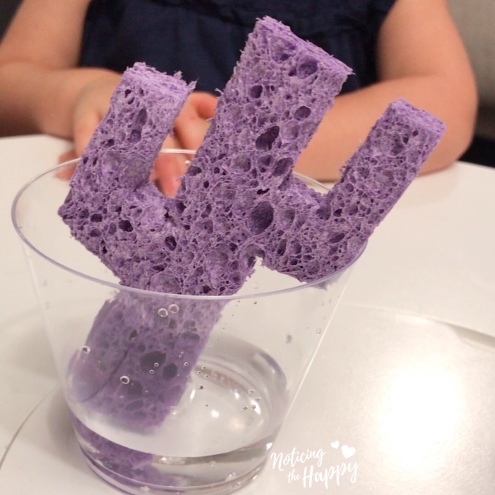 We got to watch the water slowly crawl up the cactus, but it only got about half of the way up right away. 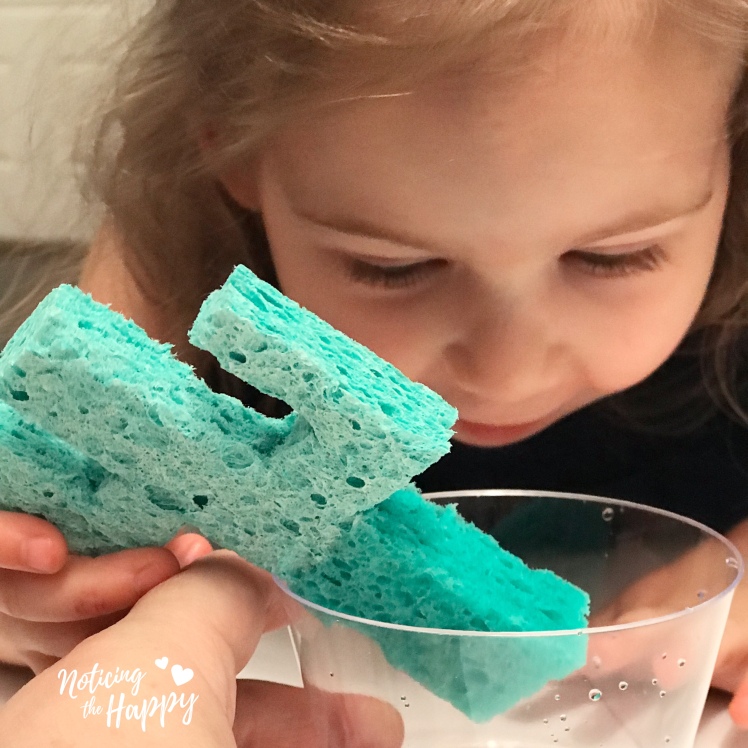 We tried waiting a little bit longer, but it wasn’t moving fast enough (at least not for the toddler’s attention span), so we left them out on the counter overnight.

In the morning, the WHOLE cactus was wet!  And the sponge stayed wet almost another day.  Ava was mildly impressed… but I thought it was super cool!  I think if we do this again when she’s older, she would appreciate it more.  She really liked the first part (where you could watch the water climb up the sponge) but I don’t think she appreciated the fact that the sponge had absorbed everything by morning.  To be fair, she is only two.  I still loved it and would do it again, especially because it was so easy.  We may use the sponges to do cactus painting later too – Ava loves painting.

See more about our All About Cactus Week here!

After so so so long... our first hugs. 🥰 Dan’s parents drove across the country, then stayed at an air bnb and waited for a negative Covid test... all to make this moment happen. We are so grateful because it gave us help for Ava’s surgery (see @AvaJuneAndMommyToo) and for the first time in the pandemic, we finally got to see family!!! A special thank you to @kinggutterbaby @twodustytravelers @epidemiologistkat and @jessicamalatyrivera for teaching us about minimizing risks so that we could make this happen. Also to all the scientists who helped make this moment possible 💕 #MomsOfInstagram #CovidVaccine #EndThePandemic #Reunion #Parenting #Positivity #Play #NoticingTheHappy #MomLife #MomBlogger #LittleSister #BigSister #Sisters #MotherhoodThroughInstagram #WatchThemGrow #MomOfGirls
Wishing that we could be together again 💕 #Hope #KidsOfTikTok #Covid19 #PandemicLife
This is our video that went viral on TikTok. It has been viewed there over 10 MILLION times. My brain honestly can’t even wrap around that number. I filmed this hoping to capture Rosie saying “Dada” for the first time and got this sweet reaction. It’s brought a lot of joy over on TikTok, so I thought I would share the joy here too 🥰 #BabiesofInstagram #Baby #DadsOfInstagram #MomsOfInstagram
Teaching my two-year-old important life lessons 😂🥰 #TheOffice #BearsBeetsBattlestarGalactica #Dwight
The two big sisters. Ava and Mabel are 20 months apart. It can be hard sometimes, having so many little ones under one roof, but this year has shown me how incredibly strong their bond is. And they automatically took Rosie under their wing. My girls love each other so much. Mabel always says “let’s do it together!” And I know they will get through life in the same way- together. 💕 #LaterGram #FamilyPhotos #PhotosByMommy #MabelElizabeth #AvaJune #ToddlersOfInstagram #Toddler #MomsOfInstagram #Parenting #Positivity #Play #NoticingTheHappy #MomLife #MomBlogger #LittleSister #BigSister #Sisters #MotherhoodThroughInstagram #WatchThemGrow #MomOfGirls
Another #latergram- Rosie’s newborn photos! I have a WHOLE new appreciation for newborn photographers. I am so proud of how they came out though ☺️ and grateful I have the memories. Babies grow so fast!! 😭 #NewbornPhotography #PhotosByMommy #Newborn #RoseMargaret #Baby #NoticingTheHappy